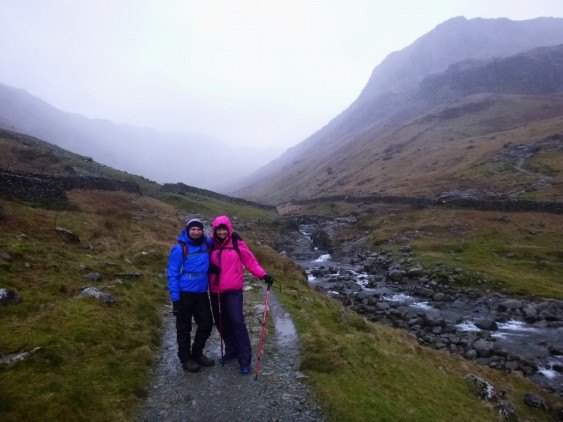 Yesterday, Iain was out with Hayley & Shaun from Peterborough who had come up to The Lake District to celebrate a special occasion. Part of this celebration was to allow Shaun the opportunity to climb Scafell Pike.

The MWIS forecast for the day was drizzly showers and a 10% chance of cloud free summits with a north-westerly wind gusting up to 50mph on the summits leading to a wind chill factor of minus 10 degrees celcius. Lots of good warm clothing would be called for then!

Photo one sees Shaun & Hayley as we approached Stockley Bridge in Upper Borrowdale. Further up the valley of Grains Gill, the view is being blotted out by yet another approaching rain shower. 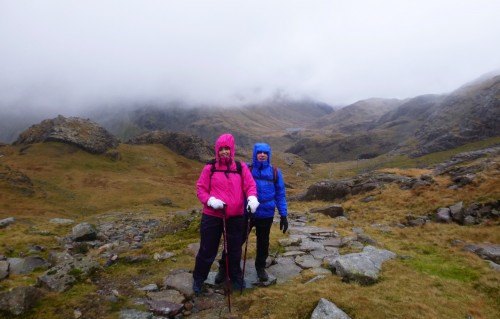 We started our Scafell Pike ascent from Seathwaite in Borrowdale. This route is just over 4 miles long and the height gain is 900 metres/2953 feet. The path from Seathwaite takes you first to Stockley Bridge and then up the side of Styhead Gill to the beautiful Styhead Tarn (a popular mountain camping spot) before reaching Styhead Pass and the Stretcher Box. At this point you are halfway on your walk and the path from here along the Corridor Route takes a gradually rising line on the north west side of the ridge running from Great End to Scafell Pike. Great views of everything are to be had on a sunny Summer's day. We had good views, but of cloud covered tops through drizzle) for most of our walk along the Corridor Route (photo two). 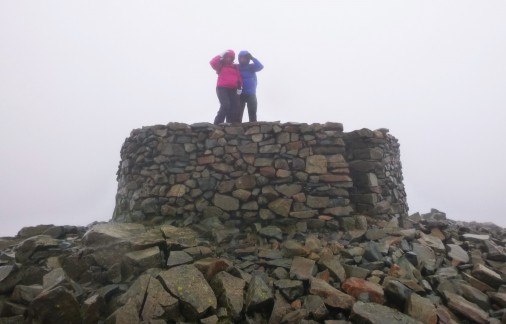 The conditions on the mountain-top today were vile; a strong westerly wind and continuous rain meant that we arrived here and left again very quickly! Our route up the head of Piers Gill to the Col between Broad Crag & Scafell Pike was probably the most sheltered way to the top available, but with the wind, rain and low temperature, it was a very chilly place to be. We stopped briefly in a shelter just below the summit and talked to a couple of lads who had walked all the way from Langdale (5 &1/2 miles away) in this foul weather. On setting off, they immediately headed away in the wrong direction until Iain called them back and put them on the right route. We do hope they made it safely back! 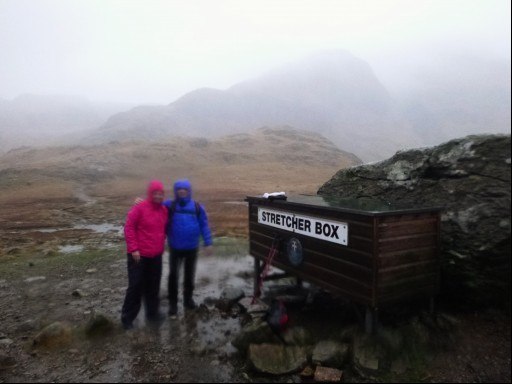 Less than two hours later, we were back at Styhead Pass where we briefly stopped again. The blurred image says it all really. On descending from Scafell Summit, the route down into Piers Gill seemed more arduous and unpleasant than on the way up; and it certainly appeared that the weather had deteriorated. Certainly, on the way back to Styhead Pass, the rain was continuous. Keeping the camera lens dry became an impossible task!

A little over an hour later, we arrived back at the car at Seathwaite, still warm & dry due to good waterproofs and plenty of fleecy layers, but some of us had wet feet and all had soaked gloves. The time was 4:35pm.

In all, we had travelled 8.25 miles/13.26 kilometres in just over 7 hours climbing up; and down almost 6000 feet/1800 m on a wet, windy & chilly day. As Iain said to the pair "Any future walks you do in the mountains can only get better from this point really!"

The couple paid just £80.00 each for Iain's experienced guiding on their Scafell Pike ascent. And unlike some of the people we met today, Iain always knew exactly where he was - even in thick mist. There is a lot to be said for hiring a walking guide who will look after you in bad conditions/poor visibility and who can tell you some of the local history; and name all the mountains you can see (if you can see them of course!)

The pair were very satisfied with their day out when Iain. When he dropped them back at their accommodation, he would imagine that the hot tap went straight on for the bath; and that the Champagne was coming out. He hopes that they pampered each other for the evening as it was well deserved!

If you fancy assistance in climbing any of the areas mountains then do give us a call. Iain has spent a lifetime living and working in The Lake District and can guide you on any route up any mountain.