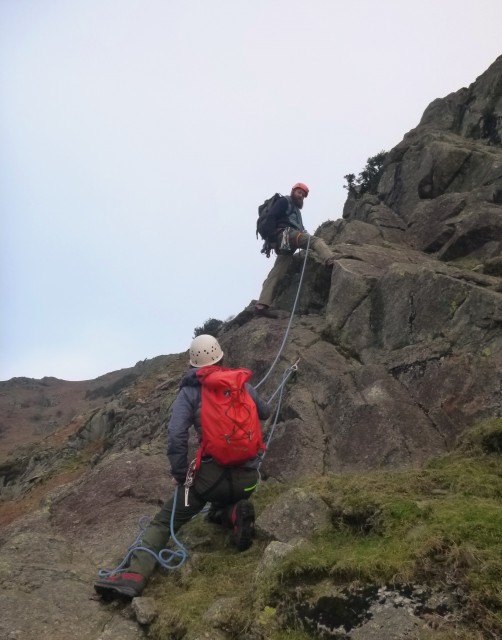 Last Sunday, Iain was out in the mountains with returning client Darren Willis and his business partner Wayne.

The first time Iain worked with Darren was some five years ago when Darren had come to us wishing to learn how to become a mountaineer.

We started off by taking him scrambling then as we were doing today. Darren wanted to revisit short roping, anchor selection and placement techniques and methods of appropriate belaying. Wayne had come along to act as Darren's "second and see what scrambling entailed.

Here, Wayne feeds the rope out to Darren who is soloing up a steeper section of "The Bell" - a great little grade 2 scramble near to Coniston; and the first route of the day. 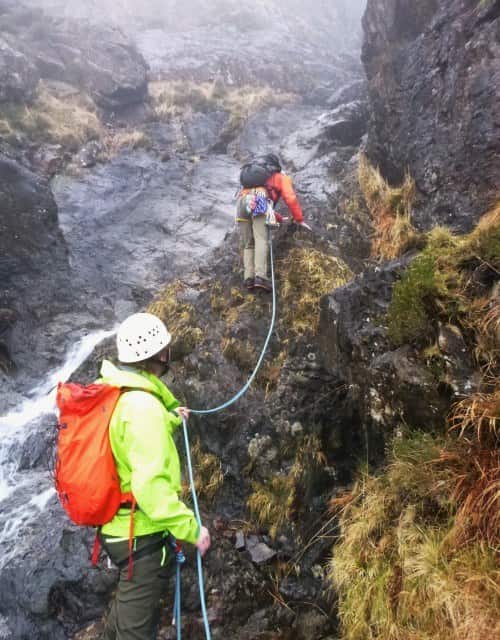 We completed The Bell in a little over an hour. Darren demonstrated that whilst his scrambling technique was a little rusty, he had actually rembered a great deal of what Iain had shown him all those years ago. Darren & Wayne work as scaffolders, so safety and constant risk assessing have to be uppermost in their minds when at work; and when scrambling on Lake District rock that is damp & slippery, one needs to be thinking in the same manner and employing appropriate belaying techniques.

Staying safe and being aware of the conditions were certainly on our minds as Darren headed off up the first pitch of Low Water Beck (grade 3). Not only was it damp and slippery, but this was also a harder scramble than the one we had just done! 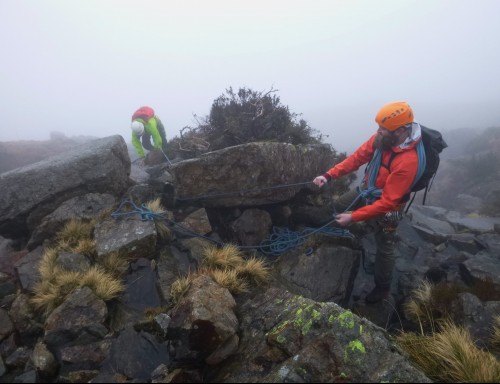 The third photo was taken some time later. Darren climbed the lower and more difficult sections of Low Water Beck with ease and competence bringing Wayne safaly along behind him.

This photo was taken in the upper reaches of the scramble on easier ground and at a place where a simple & quick belay was to just run the rope across this massive block of stone to safeguard Wayne as he scrambled up the buttress below. This type of belay is known as a "direct belay" and is often used when scrambling - pick your type of rock for doing this carefully though as rough, coarse grained rock will ruin your exensive climbing rope very quickly! 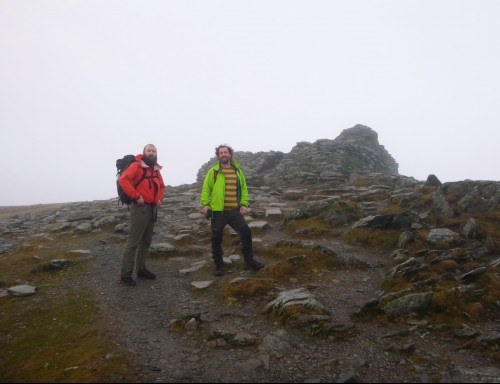 The final photo from this post about a Scrambling Skills Refresher Day in The Lake District sees Darren & Wayne at the summit of The Old Man of Coniston (803m/2'634ft) at around 15:30; about 45 minutes after we had reached the top of Low Water Beck.

We could have gone on to do a third scramble - Brim Fell Slabs (grade 2) which would have brought us all the way to the top of the ridge to the north of this point, but the chances are, we would have finished in darkness and visibility was already down to about 50 metres in the cloud.

Scrambling is a great way to reach the summits of any mountain where you can; tackling a lofty rocky, exhilarating ridge is much better than following hordes of walkers up the footpath and whilst we saw many people on the path to the summit of the Old Man, we had both scrambles to ourselves today. Just lovely!

Guided Scrambling or Scrambling Skills Training in The Lake District costs just £160.00 between two persons per day. Helmets, harnesses and the use of a rope and other equipment is included as part of the fee.

You can see more photos taken from this great day out here.

Contact us to book your Guided Scrambling Day or Scrambling Skills Training Couse in The Lake District now. You won't be disappointed.