Stretch your legs with a guided walk on The Lake District Fells. Wednesday 9th January, 2019. 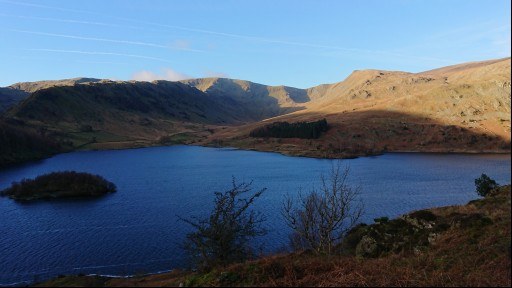 Well, unfortunately Winter conditions haven't arrived in the Lake District this year - yet, but the high pressure has meant we've had some marvellous dry, cold, yet settled weather.

Last Tuesday and Wednesday were about as good as it can get at this time of year without snow, so we decided to go and explore a somewhat remote corner of the eastern lakes fells.

Photo one sees the view from the Mardale Head/Bampton Road. The lake is Haweswater under which lies the drowned village of Mardale. In the background is the valley of Riggindale with the ridge of Rough Crag leading in from the left towards the summit of High Street in the distance. Rough Crag/Riggindale was the home of The Lake District's one and only Golden Eagle until it disappeared in 2016. 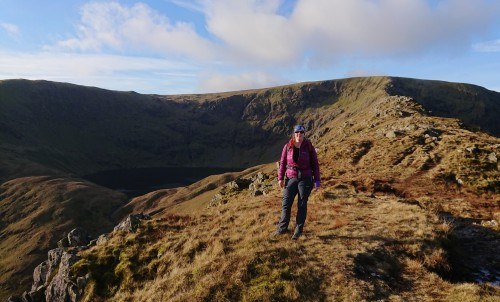 We parked at Mardale Head and walked around the north shore of the reservoir to reach the eastern end/foot of the Rough Crag Ridge. A good path rises gradually from here with ever improving views down Haweswater and of all the surrounding fells. Eventually, Blea Water - nestling under the east face of High Street, comes into view (photo two).

Continuing along the ridge leads to a slightly lower col where an alternative path comes in from Mardale Head/Blea Tarn before one climbs a series of three steps to the plateau that forms the summit of High Street. 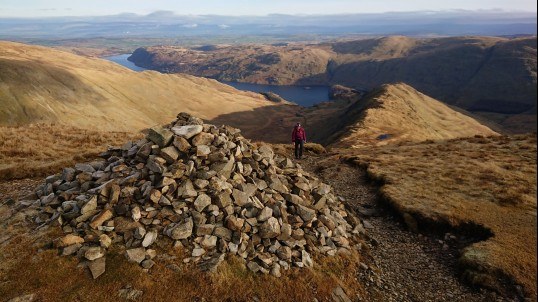 The View from the cairn on the edge of the High Street Plateau looking back to the line of our ascent along Rough Crag. Riggindale to the left, Mardale Head to the right and Haweswater in the distance. It had taken us roughly two hours of fairly leisurely walking to get to this point; and the summit of High Street was only 5 minutes away to the south east.

Even though the wind had dropped, it was bitterly cold up here on the highest top in the far eastern fells of The Lake district. So far, we had travelled 2 & 3/4 miles and achieved a height gain of 1956 feet. From the summit of High Street, all views were truly stunning; and it was so clear one could see for many miles! 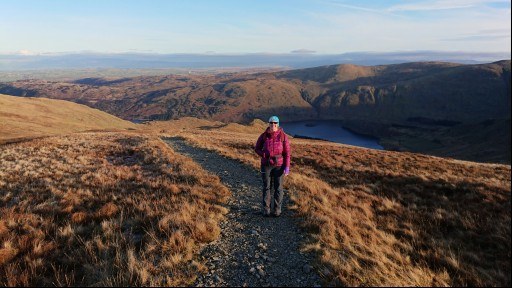 From High Street, we journeyed north descending to the col at the "Straits of Riggindale" before heading up on to Rampsgill Head and across to High Raise - the last high summit before the ridge begins to fall steadily away towards the northern end of Ullswater. We turned about and visited the summit of Kidsty Pike before descending east towards Kidsty Howes and the foot of Riggindale where we observed a large herd (40+ animals) of grazing Red Deer - probably the greater proportion of this isolated herd which inhabits the fells between Martindale to the north and the Kentmere Valley to the south.

We visited the now redundant RSPB hide in Riggindale before walking through the remains of fields from the Mardale farming community era; arriving back at the car at 4pm. We had taken a little under six hours to complete this 8 mile "Riggindale round" on what had been a fantastic day.